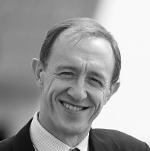 Rob has a background in focussed regeneration delivery agencies including Telford New Town, Sheffield Urban Development Corporation and English Partnerships.  His career has also included working for Sheffield City Council and, within the private sector, Bucknall Austin, where he led on both construction and regeneration projects.

Rob headed up National Programmes within EP before its merger into the Homes and Communities Agency; now Homes England.  His area based work has included delivery of major projects such as the reclamation and development of Avenue Coking Works and growth of the Advanced Manufacturing Park Technology Centre in Sheffield City Region.  In the Humber, his team opened up Goole 36 for over 4,000 new jobs with Siemens now lined up for the heart of the site.  He is on investment boards in the Humber, Sheffield City Region and the Tees Valley.  Other roles have included a 4 year term on Rotterdam’s International Advisory Board and chair of the Yorkshire and Humberside ERDF Access to Finance sub-committee.

Rob took up the General Manager post for the North East, Yorkshire and The Humber Operating Area for Homes England in January 2017. Major projects for the Operating Area this year include driving forward the development of York Central for mixed uses and working in partnership with the Defence Infrastructure Organisation on bringing forward housing at Ripon Barracks.